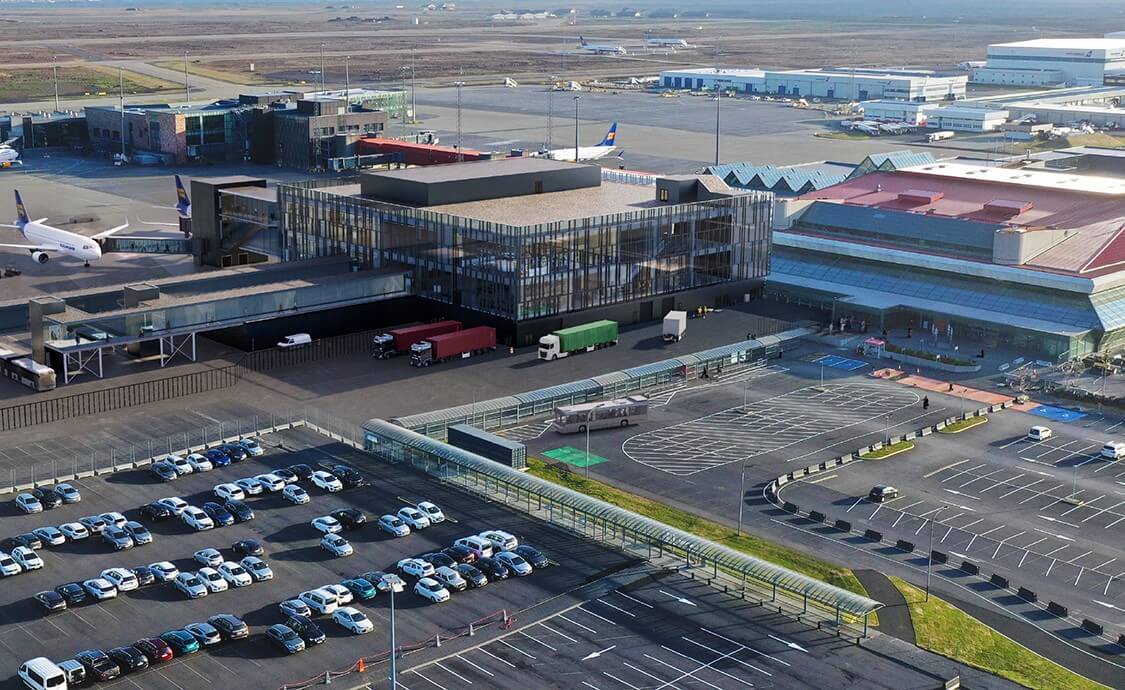 A new period of construction and expansion is underway at Keflavík airport. Earlier plans were halted by the Covid-19 pandemic, but that time was used to re-evaluate the situation and future prospects. Keflavík airport is on of Iceland’s most important infrastructure assets. The airport plays an important role in the country’s economy and is also the key to the nation’s extensive cultural contacts abroad. Iceland’s geographical location creates opportunities in intercontinental transport and Isavia works to ensure that Keflavík airport remains a key centre for aviation in the North-Atlantic. A sharp increase in the number of passengers in recent years has tested our infrastructure and, even before the start of the pandemic, it was clear that steps had to be taken, in the years and decades to come, for the airport to maintain its competitive advantage. In 2021, the board of Isavia agreed on a new expansion plan and on 1 June, Bjarni Benediktsson, Iceland’s minister of finance, broke ground for a new extension that will allow us to vastly improve service to passengers.

Many Stages in Construction

The opening of Leif Eriksson Terminal, in 1986, marked a turning point in Iceland’s aviation history. Since then, many extensions and new buildings have been added in stages, to meet the rapid increase in traffic of both aircraft and passengers. In all, the Leif Eriksson Terminal has tripled in size since 1987. The most important project was the addition of the southern terminal which is connected to the main terminal by a covered pedestrian bridge. Now we embark on a project to extend the terminal to the east and connecting the main and south terminals via a larger bridge and bigger service areas. This will also allow for more jet bridges to be added, along with improvements to taxiways and aprons.

Early summer 2021, construction began for a new, 20,000 m2 extension to the east, enlarging the terminal by 30%. Earthwork should be completed this autumn. The new building will have three floors and a basement and will be ready for use in 2024. This is an important stage in Isavia’s new construction plan and will greatly improve passenger service as well as providing and improved working environment for staff. The first stage involves the installation of a new and efficient baggage handling system on the ground floor, to be completed in 2022. The arrivals hall will be much roomier and the duty-free store larger. The second floor will house new commercial spaces and the passenger waiting areas will be enlarged.

extension of the south terminal

An extension on two floors (no basement) will be added to the south terminal (Apron 10). This will provide improved facilities for passengers at the departure gate. This extension calls for the construction of a new gangway and taxiways will have to be altered.

CHANGES IN THE PROCESSING OF PASSENGERS FROM OUTSIDE THE SCHENGEN-ZONE

Due to new European regulations that come into effect in 2022-2023, changes must be made in arrival and departure areas. A single-floor, temporary building will be erected at the south end of the terminal to meet these demands (Apron 6).

New rules will be adopted for the registration of arriving and departing passengers. Information must be gathered on passengers from outside Schengen who are refused entry and the processing of passengers will be altered to reflect concerns about law-enforcement. This will be done using a centralised data system that tracks the arrival, departure, and length-of-stay of people from outside Schengen – passports will no longer be stamped.

All registrations must be accompanied by fingerprints and photographs.
The goal is to improve border controls. The new building will be constructed this winter but will only be a temporary solution. Once the planned expansion of the main terminal is completed, the building will be taken down and used elsewhere.

Tenders will be invited this year for construction work on two taxiways at Keflavík Airport. A new 1200 m taxiway (Mike) will connect the terminal aprons to the runway. This work will include lighting installations and the aim is to improve traffic flow and the safety of the runway system. The second tender will be for maintenance work on one of the large existing taxiways (Kilo), including the renewal of lighting systems.

Tenders have been invited for two new roads by the airport. One is a 1500 m service road that connects to the construction areas but will in future serve to transport goods to and from the airport and terminal. The second road is a 500 m stretch that completes a circular connection from the roads in front of the terminal to the highway. This will greatly improve traffic safety and prevent bottlenecks.

Another important phase in the extension of Leif Eriksson Terminal involves a better connection between the north and south terminals. The existing walkway will be widened, and this new and well-lit connecting area will improve facilities for arriving passengers and passport control, as well as providing space for a new duty-free shop and new service areas. Preliminary design work will begin in 2021 and construction is expected to begin in 2023.