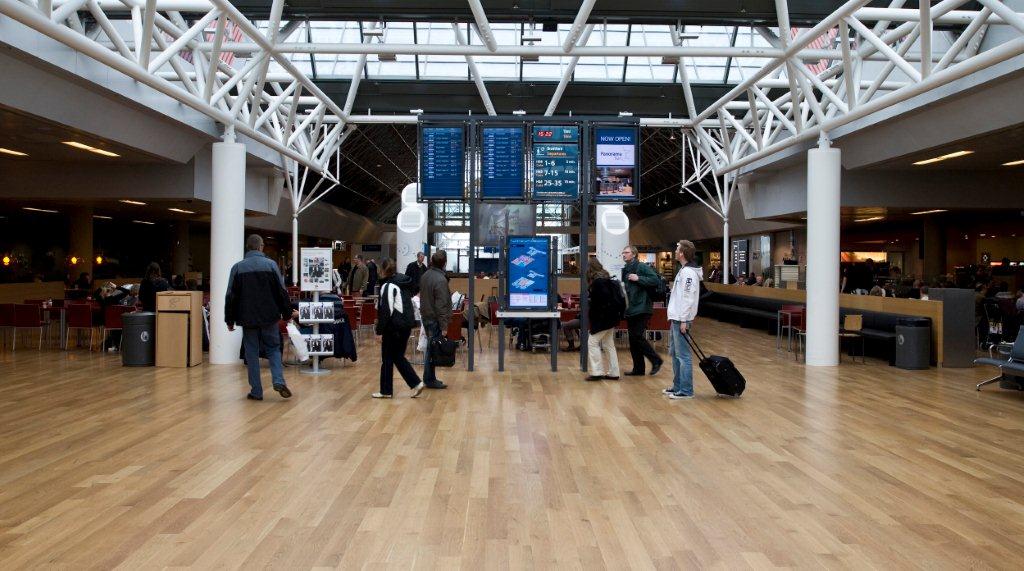 USA Today published an article about the best and worst airport terminals. In the article Leifur Eiriksson Air Terminal ranked second best in the world.

"An hour-long wind delay made a mess of Terminal A," says Clampet, senior online editor of Frommers.com. "There weren't any seats, people were sitting on any available floor space, and the bathrooms looked like the aftermath of a Giants-Cowboys game."

With that in mind, Frommers.com has provided USA TODAY with its choices of best and worst airport terminals. Newark's Terminal A — despite Clampet's bad experience — did not make the worst list. But another nearby terminal did.

The travel guide publisher says the best and worst choices were based on cleanliness, services, on-time departures, navigation and the ease of getting to and from a city's center.

The world's best, according to Frommers.com, is Hajj Terminal at King Abdul Aziz International Airport in Jeddah, Saudi Arabia. It covers 120 acres and is only open during the six-week Hajj, when millions of Muslims make a pilgrimage to Mecca.

Two years ago, the terminal received an American Institute of Architects award for an architectural design "that has stood the test of time for 25 years," the institute says.

"The most stunning feature," Frommers.com says, "is that the terminal consists of 210 white fibreglass tents that create a chimney effect cooling the hot desert air."

Only one airport terminal in the USA — JetBlue Airways' Terminal 5 at New York's JFK airport — finished in the top 10.

The terminal, designed by Eero Saarinen for now-defunct airline TWA, is "one of the greatest icons of the mid-20th Century jet age," Frommers.com says. The terminal, it says, "has been intelligently swallowed by the grasping tendrils of JetBlue's modern new terminal, which has by far the best airport food court in New York."

Cozy with a dramatic view

The world's second-best terminal is Leifur Eiríksson Air Terminal in Keflavik, Iceland, about a 45-minute drive from Reykjavík, the nation's capital.

Fourteen passenger airlines fly into the airport during the summer, including Icelandair and SAS, which operate year-round service.

"Iceland's cozy, little international airport looks like it arrived in a flat pack from Ikea," Frommers.com says. "It's all blond wood and volcanic-looking stone with big windows looking out on the dramatic Icelandic landscape."

"If a city has an excellent terminal, it says to the visitor that they're thought about," Clampet says.

"Cleanliness, good light, space to rest between flights, decent food and some strategically placed plugs are enough to say to visitors, 'We know you'd rather be somewhere else right now, but while you're here, we'll take care of you.' "

Frommers.com says such customer care is lacking at the world's worst terminals.

The worst, according to the travel guide publisher, is JFK Airport's Terminal 3, an old facility that was once the base of now-defunct Pan Am's flights and is now used by Delta Air Lines.

An expansion and renovation project, scheduled to be completed by 2013, will make the terminal "a modern facility that will warmly and efficiently welcome travellers," Delta says.

"Terminal 3 is known for endless immigration lines in a dank basement, an utter lack of food and shopping options, three crowded and confusing entry points, and hallways that could have been designed by M.C Escher for vomiting international travellers out onto an underground sidewalk with no cabs available," says Frommers.com. "There's also a sense that the cleaning crew gave up in despair a while ago."

Terminals at two other New York area airports — Newark's Terminal B and the US Airways terminal at New York's LaGuardia — also make the 10 worst list.

Delta, which shares the terminal with US Airways at LaGuardia, announced plans to expand and renovate it and an adjacent terminal beginning this spring.

Chicago's Midway is the only other terminal at a U.S. airport on the worst list.

The six other terminals on the travel guide publisher's worst list are at airports serving Manila; Moscow; Paris; Nairobi, Kenya; and Amman, Jordan.

Paris is the only destination besides New York with terminals at more than one airport on the list.

Frommers.com says that Paris' Charles de Gaulle received the 2010 and 2009 awards from SleepingInAirports.net for worst airport to sleep in. This year, the website decided to give the airport a break, in part, because of reports "that the homeless population was being segregated to Terminal 3 at night."

Those reports, plus de Gaulle being "an awful airport to change planes," landed Terminal 3 on Frommers.com's worst list.

The terminal at Paris Beauvais Airport, 50 miles north of France's capital city, is also the pits, according to Frommers.com.

The travel guide publisher blames discount airline Ryanair for adding Paris to the name of the "depressing, low-cost box of an airport in Picardy." It's rated one of the world's worst airports by SleepingInAirports.net because of a lack of seating, lack of services and "general half-tent, half-warehouse atmosphere," Frommers.com says.

Paris Beauvais Airport "lacks a rail link to Paris and closes overnight, so hope that your flight doesn't get too delayed, or you may be camping out on the lawn," the travel guide publisher says.

The world's 10 best and worst airport terminals, as ranked by Frommers.com.