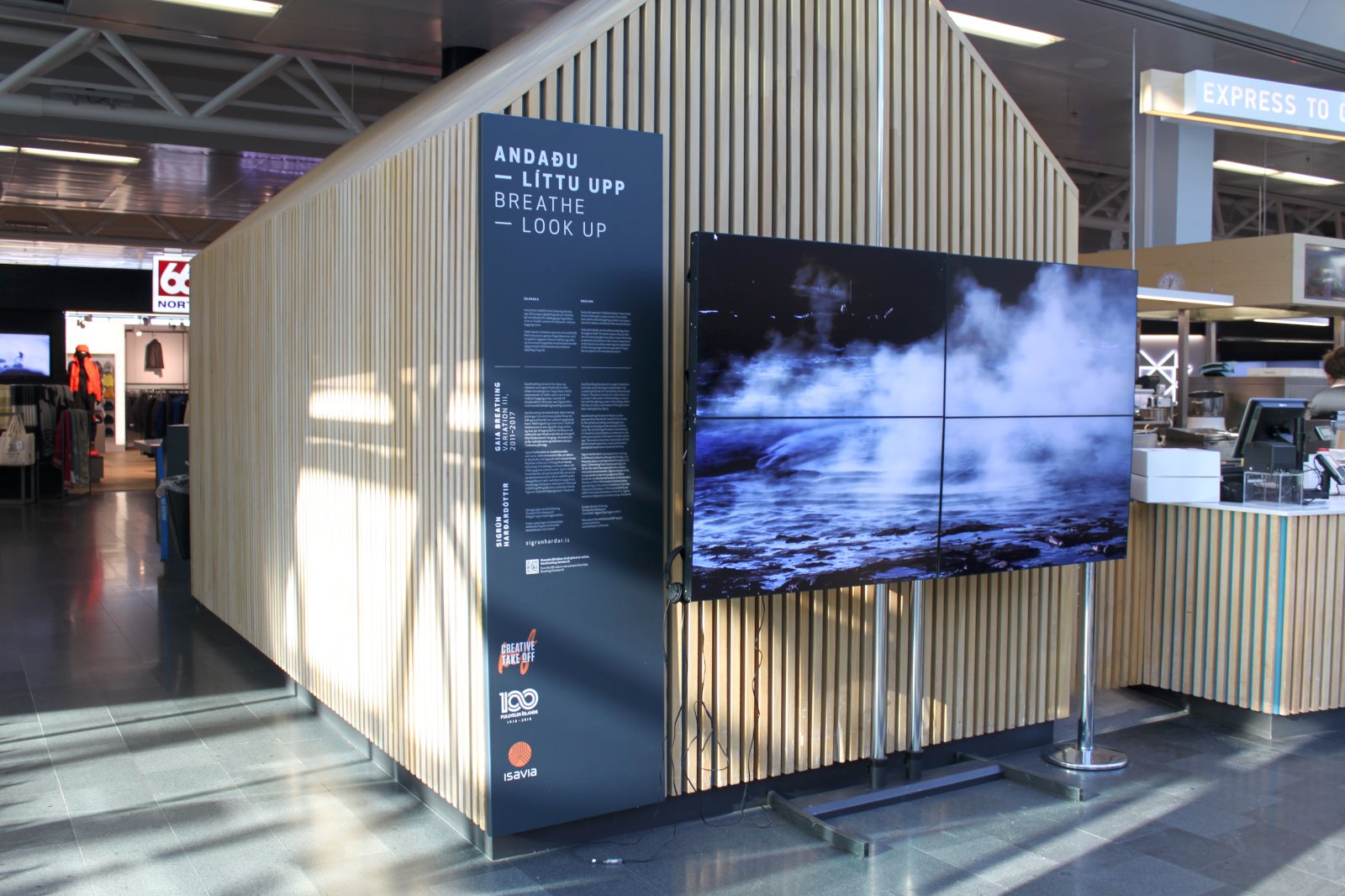 Light and video connected in unique exhibition at Keflavik Airport

Hosted by Isavia and curated by Kristín Scheving, an exhibition series with three Icelandic artists will be displayed at Keflavík International Airport between February and October 2018. The exhibition seeks to continuously explore the possibilities of connecting light and video in public spaces in ways that bring an element of presence to the visitor’s experience of the location. The exhibition is unique in that the visitor is present in the installation upon walking into the customs checkpoint all the way upon entering the embankment without necessarily realizing it, a testament to the unique lighting scheme through which the works are presented.

The cultural landscape of today is in many ways defined by the images presented to us on screens. In a variety of contexts, a screen can trace memory and imagination, as well as equally geographic layers of the physical landscape - it is on the screen in which they are folded into a projectionable entity. The screen, however, is an apparition in itself, made through the transmission of light. Emerging from a site of public consumption, this exhibition series expands notions of light and electronic images from the art museum and is mobilized into a new spatial recognition that is part of the experience of motion, transit, and spectatorial life.

Three Icelandic artists will be exhibiting works between February and October 2018. Their work comprises of many aspects of the capabilities of the moving image that are especially fitting in the non-place of in-between that is an international airport. Besides presenting images of the Icelandic landscape, the works also traverse between imagination and sensibility in a layered movement that explores both the surface and the interior. Using the imagination to record sensory perceptions, the work of these three artists working with the moving electronic image is strung between two worlds, or perhaps three, like a secretary between the imagined world, physical reality, and our technological condition. These works provide an intersection between spirit and body in which technology is at the synaesthetic forefront.

Sigrún Harðardóttir is a visual artist working in different mediums although technology continuously plays a running thread throughout her work. Culminating from mainly working with 2D art, her work has expanded into complex interactive environments. Sigrún studied in the postgraduate visual arts program at Rijksakademie van Beeldende Kunsten in Amsterdam. She has an MA in Multimedia Communication, specializing in interactive installations from the University of Quebec in Montreal (UQAM) and a BFA from Iceland Academy of the Arts. Sigrún was born in 1954 and is currently living in Reykjavik.

Ásdís Sif Gunnarsdóttir is known for her performances and video installations which are often shown in unconventional settings. Her works span from large video installations and performances to spoken word poetry and photography. Her works are performed both in-person and live via the internet, a medium which is well-suited to the temporal and spatial dimensions explored in her work. In her performances that often involve poetry, Ásdís uses ornate motifs that have both mundane and metaphysical connotations. She has a BFA from the School of Visual Arts in New York and an MA in New Genres from UCLA. She has participated in numerous group shows in Iceland and abroad including the Tate Gallery, Centre Pompidou, Roma Film Festival, and TBA 21. Ásdís was born in 1976 and is currently based in Reykjavik.

Haraldur Karlsson has specialized in experimental video art for the last couple of decades. Haraldur holds a diploma in Mixed Media from the Icelandic Art School in Reykjavik and BA degree in Media Art from AKI (Academy of Arts and Industry) Enchede, The Netherlands. He studied Sonology at the Royal Conservatory of The Hague. Between 1999–2009, Haraldur worked at the Icelandic Art Academy as head of Media Lab. Haraldur has held numerous exhibitions, performances and lectures both in Iceland and abroad. He was born in 1967 and is currently based in Oslo.

Kristín Scheving is a visual artist and curator that has worked for over a decade doing similar projects with video and light-art in public spaces. She was the director and founder of the experimental film and video festival, 700IS Reindeerland for 10 years (2006–2015), which involved projecting artworks in a variety of public exhibition spaces as well as working with artists experimenting with light and installation in live performances involving poetry, interactive art and projections.  From 2013–2017 she was head of Vasulka Chamber at the National Gallery of Iceland. 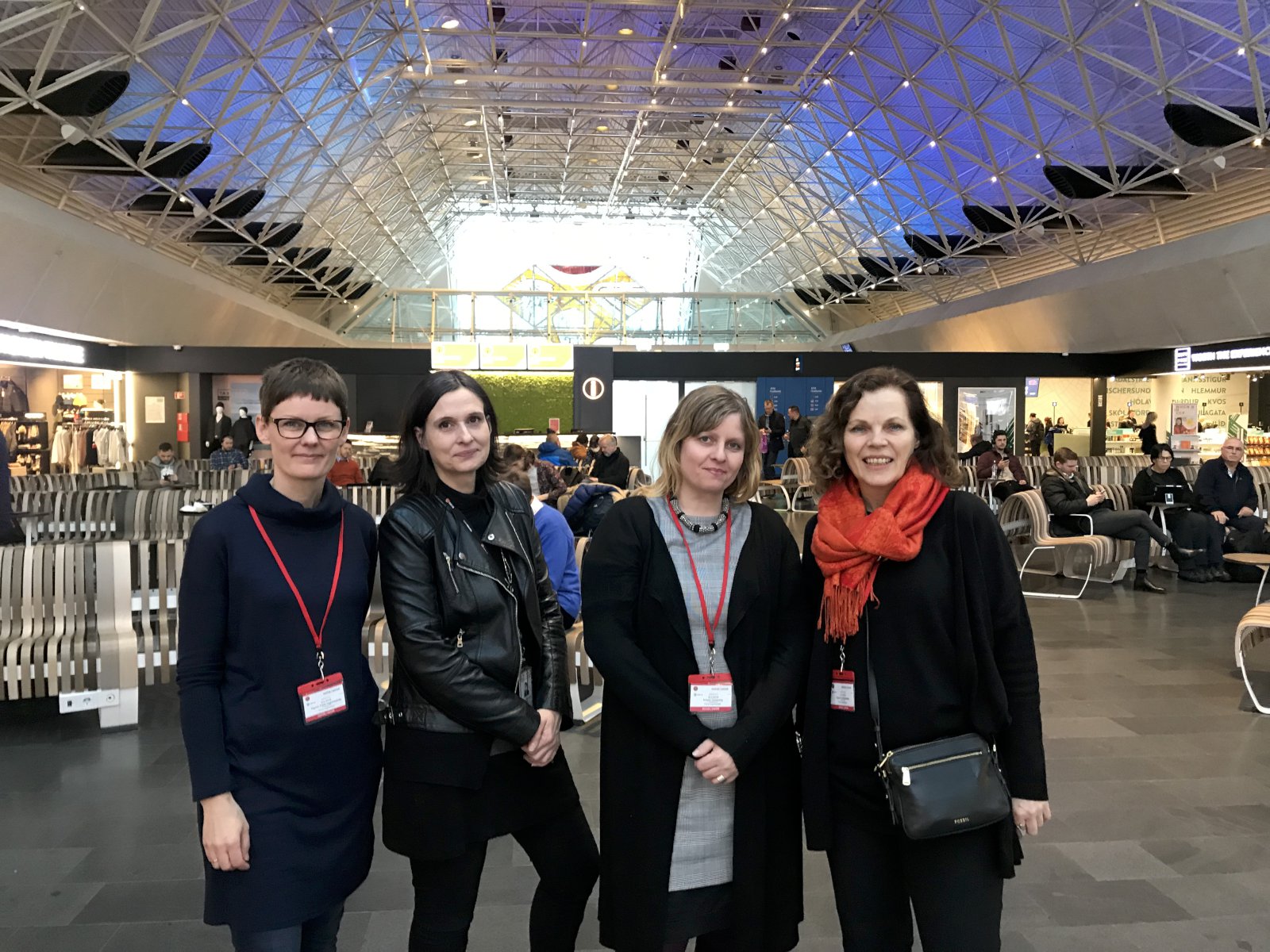